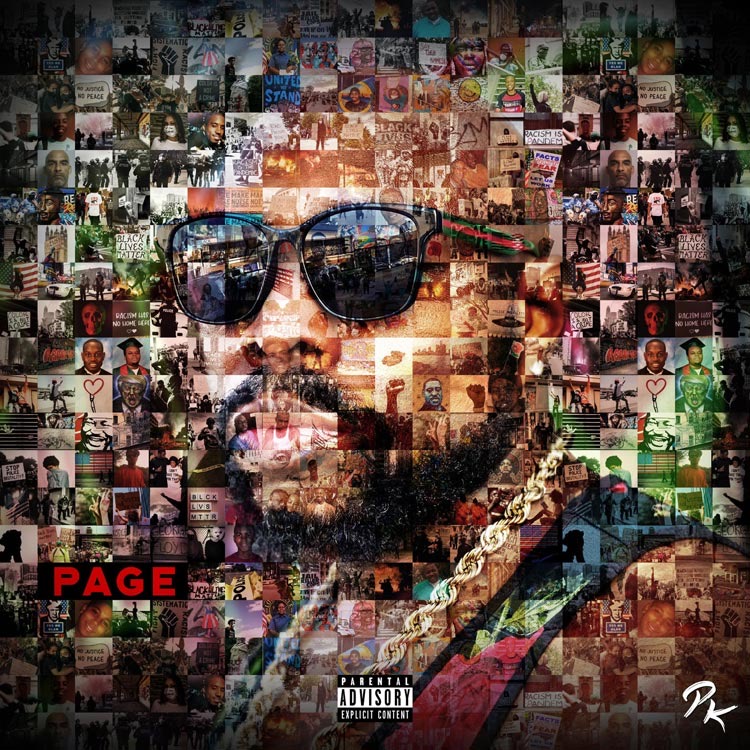 People from our past have a habit of popping up in our lives at unexpected times. Your childhood best friend that you slighted being the hiring manager at a new job, that ex you had a breakup with serving at the restaurant you’re at on a first date, or an actor from one of your favorite cult-classic TV shows dropping a fire tape that comes across your desk.

Fortunately for me, this time we’re dealing with option # 3.

Page Kennedy was a staple of Spike TV’s Blue Mountain State and has appeared in recurring roles and bit parts in TV shows for the last 15 years. Now, he’s gifted us his SEVENTH full project in the form of Page. I had been vaguely aware that Page had released a few tapes in the past, but it wasn’t really on my radar. Page has really opened my eyes to Kennedy’s potential as an artist, plus now I have a huge back catalog to work through and pick apart line by line.

Kennedy explodes out of the gate on opening track ‘Woke,’ backed by a triumphant, bombastic brass-filled instrumental that’s reminiscent of something from Watch the Throne. At the top of his 2021 return to the game, Kennedy takes shots at mumble rappers, podcasters, Lil Pump, head-nodders, and bloggers (ahem). Sure, those are a lot of targets, but Kennedy delivers these lines with such ferocity and conviction that I’m inclined to believe he could actually rise above all every one of them (besides this blogger, (hopefully)).

Another highlight for me is actually the second track “Pain” with great features from fellow Detroit native Elzhi and the legendary Method Man. The Method Man feature should come to no surprise as over the course of Kennedy’s long rap career–which started when he was 7–he’s opened for huge artists like Biggie, Ice Cube, and of course Method Man.

All three of them absolutely body their verses, as expected, and we get a little Wu shoutout during Method Man’s verse. This track really stands out for a lot of reasons, namely it’s one of the only tracks that is full-out braggadocio coming from Kennedy, besides the opener of course.

Most of the album focuses on black empowerment, the Black Lives Matter movement, and anti-police statements from Kennedy and collaborators alike. It’s clear from lyrics on tracks like “Fear” and “Safe” that Kennedy has real, personal experience with police brutality and intends on making his frustrations known to everyone that listens. It’s these kind of right-in-your-face, matter-of-fact bars Kennedy brings that are so often lacking from other rapper/actor projects.

Kennedy has been showing us both sides of his career, rapper and actor, for 15+ years now and it seems his albums just keep getting better. This was raw, real, and to the point.

Now, excuse me while I dust off my Blue Mountain State DVDs and comb through the rest of this discography.

CHECK OUT PAGE AT THESE STREAMERS BELOW