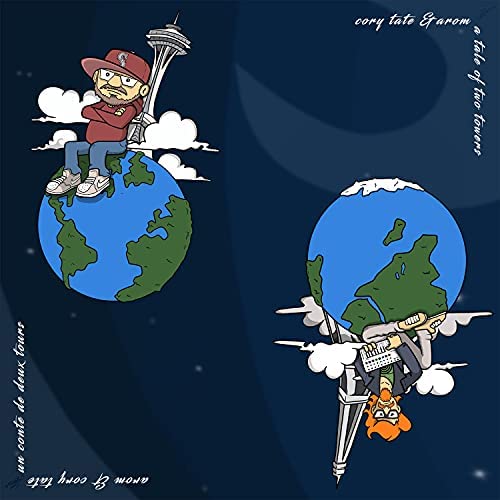 On his Instagram, Cory Tate says he raps a little and dads a lot. This Everett, WA rapper has intermittently released singles much to the enjoyment of listeners throughout the greater Seattle area and beyond. In addition to his highly regarded singles, he’s also released extended projects including his 2018 EP, Afterlife and his est twenty collaboration album bad hands. Much to the pleasure of his already established following, Cory Tate has released a brand new EP to add to his already revered discography.

This new EP is the collaborative product devised between Cory Tate and French producer Arom of Mutant Ninja Records. The project is entitled A Tale Of Two Towers referring to the Space Needle and the Eiffel Tower, landmarks in Tate’s and Arom’s respective turfs. Though they hail from two different sides of the globe, these two artists’ shared love of Hip Hop and 90’s pop culture makes them the perfect pair for the synergistic team-up that is this EP.

From Lille in the North of France, Arom utilizes synthesizers as well as drum pads creating a sort of Daft Punk meets RZA vibe. His stylings range from eerily gothic to 8-bit whimsy, proving that one soul can be both tortured and fun-loving if the particular mood strikes. In addition to his skills on the beats, Arom is also a gifted emcee delivering lyrics with machine gun rate and intensity.

Cory Tate is a prolific emcee with a devil-may-care attitude and a multisyllabic rhyme scheme. In addition to this disaffected defiance, which Tate struts unapologetically, he also expels a host of nostalgic references to child-aimed IP’s from the late 80’s and early 90’s. These instances (not limited to references to The Karate Kid, Pokémon, Disney’s Robin Hood, Dudley Do Right, Mystery Men, and many others) create in Tate a persona that is wholly his own –an unashamed rebel who’d much rather kick back with some old cartoons than to put up with the nonsense of people or an overly-judgmental world.

I exchanged emails with Tate earlier this week to discuss his experience producing this EP. Tate explained that he and Arom have known each other for over a decade. After hearing one of his songs around 2009, Arom contacted Tate in interest of creating an international crossover. In the following years, the two artists maintained contact, at times discussing further collaboration. Around 2018, Arom sent Tate a selection of beats from which to choose, but Tate found himself partial to all of them. It was then that Tate suggested that the two collaborate for more than just another single, but rather a long-form project which ultimately became A Tale Of Two Towers.

In A Tale Of Two Towers, Arom and Tate take listeners on a multi-faceted journey through the musings of an introspective man with a passion for his family and concerns in a broken world. But much like the characters of the two artists who crafted it, the tones of the EP fluctuate between grittiness and childlikeness. In this project are both the effervescence of “Karate Kid”, a braggadocious romp that uses pop culture figures to laud the rapper’s greatness, and “A Devil’s Toll”, a haunting narrative about a husband and father who’s nursing a secret heroin addiction. These two seemingly contradictory tones somehow don’t conflict with one another, they in fact pair with one another quite well. With the presence of both the blithe in the bleak, Tate and Arom provide not contradiction, but balance. In so doing, they give a helpful response to the question ‘How can someone keep from going insane in a world so senseless?’ –by not becoming disillusioned and yet keeping a sense of humor.

The tone of the project is certainly the spirit of the EP, but the substance of the work is the music itself. In that sense, A Tale Of Two Towers is the pleasant marriage of old school and new school Hip Hop. Arom’s backings employ the tools of early Hip Hop producers –the turntable, analog synth machines, sampler pads– but he also reinvents that throwback feel by using more recent musical trends like triplet-heavy drum rhythms and synth pads that further accentuate the mood of the music. Over Arom’s beats, Cory Tate waxes lyrically with thrilling speed, regularly shifting vocal timbre into an almost melodic cadence. Joining Tate, Arom also provides a number of verses performed in French, which adds a level of worldliness and globality to the music. This project flies by, wasting no time to hit hard with a bang. Even the introduction track, aptly named “The Intro”, parades two electrifying verses from both artists that prepare the listener for the ride ahead. This eight-track EP is jam-packed with a diverse collection of songs with a range of engaging content. These include the autobiographical “90’s Kid” chronicling the development of Tate’s rap craft, “One Night” which is a game-strutting love song, and “Hourglass”, which explores an artist’s race against time to achieve their creative goals.

A Tale Of Two Towers is a project with both bounce and authenticity. Experiencing this project is as entertaining as it is insightful. One might say that in this international collaboration, Cory Tate and Arom have expanded the genre’s understanding of independent music. Indie Hip Hop does not need to be small in scale, it can be global, it only need have the unrestricted freedom for an artist to be entirely themselves cartoons, contemplation, and all.

Make sure to follow Cory Tate (@cory.tate) and Arom (@arom_muntantninja) on Instagram and check out A Tale Of Two Towers anywhere where music is playing!

CHECK OUT A TALE OF TWO TOWERS AT THESE STREAMERS BELOW