The multitalented Onry Ozzborn has been producing and performing in the Seattle area for the better part of the last twenty years. Introspective and philosophical, Ozzborn’s work is Hip Hop in its purest form, showcasing a complex rhyme scheme and a robust vocabulary. In addition to his lengthy career as a solo act, over the years Ozzborn has collaborated with like-minded artists forming multiple collectives in what seems like an ever-expanding shared universe of brilliance!

In 2009, Ozzborn joined up with Chicago-based producer Zavala to create the alternative Hip-Hop duo Dark Time Sunshine. This innovative team-up combined Ozzborn’s gritty lyricism with Zavala’s eclectic combination of techno, synth, and break drums. DTS released two full-length albums, Vessel (2010) and ANX (2012), both met with listeners’ acclaim. Since these releases, both Ozzborn and Zavala have continued to put out solo projects but now Dark Time Sunshine is back, set to drop a brand new album entitled Lore in February 2021.

Ahead of the album, the group released a music video for not one but two singles on the upcoming project. Directed by local filmographer Tim Slew, this video highlights some of Seattle’s most picturesque sites and features cameos from local and national indie Hip Hop figures including Aesop Rock, Ish (of Digable Planets and Shabazz Palaces), Vitamin D, and Cool Nutz. This video is divided into two-parts and debuts singles “7 Knots” and “Ayemen”. 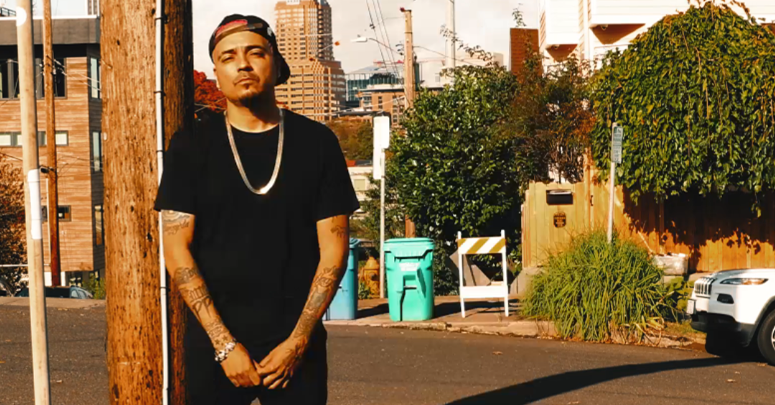 The first portion of the video is dedicated to “7 Knots”. This track is an autobiography, depicting Ozzborn’s journey growing up, learning the ways of life, and sharing what he’s learned to his community. He speaks of the struggles he’s endured but refuses to disparage any of his experiences because they have made him stronger. This is best expressed through the lyric ‘Although my vantage point at that moment was rock bottom, it taught me how to morph colors and become autumn’. Visually, this first segment of the music video seems to pull from that line and its themes. With spooky Halloween-like imagery, Ozzborn is shown like an occultic entity strolling through a park, possessing passersby when he touches them. This piece is theatrical and quite striking. It is also quite entertaining to see Ozzborn place his hand on the shoulder of an actor and see that actor (played by James Shea) perform Ozzborn’s verse in perfect lip-sync.

As this first song comes to a close, the scene shifts to the interior of an apartment building where Ozzborn is shown sitting with the same group of people present at the park; he follows them through a door and the frame is filled with white light. When Ozzborn emerges from the light, he finds himself on the roof of a building mesmerized by the beauty of the sun. It is here that the second track begins.

This latter portion of the music video follows “Ayemen”, a triumphant celebration of overcoming adversity. The hook for “Ayemen” cheers ‘Broken before, but never again! These fishing hooks still facing each other, addicted to one another, Ayemen!’ The illustration of two fishing hooks is Ozzborn’s picture of a heart still intact, unbroken despite life’s woes.

This winsome anthem was birthed from Ozzborn’s family’s trials over the last two years. When Ozzborn’s 10-year-old daughter Violet was diagnosed with Non-Hodgkin’s Lymphoma, a form of cancer for which she would need immediate treatment, Ozzborn and his household were brought to extreme depths of fear and pain, the likes of which one who’s not experienced this personally could never imagine. Thankfully, however, the prompt treatment Violet underwent has since proven successful and she is now in good health. The momentous joy of this victory is in the very fabric of “Ayemen” in its use of medical language and roaring rapture as the elated emcee calls listeners to ‘put [their] stethoscopes up in the air’. Zavala’s accompanying beat boasts bold drum patterns and a meandering synth that will have the listener unsatisfied with simple head-bobbing–this music makes you want to jump to your feet. Quite appropriate to its rooftop setting, this track is a jubilant ‘on top of the world’ sort of chant where Ozzborn mocks the obstacles before him and happily dances with his children and family beneath the open sky.

These two contrasting tones, the haunting, macabre “7 Knots”, and the joyous romp of “Ayemen” work together to illustrate that trials lead to triumph, and that both kinds of experiences make every person who they are. The joining of these two songs and their themes was an ingenious decision for Dark Time Sunshine and their creative team. As evident from the artists featured in this video, DTS has already garnered a well-earned legacy of respect from their peers and if this music video is any indication of the forthcoming album as a whole, the game is in for quite a revelation to be sure!

CHECK OUT “AYEMEN” AT THESE STREAMERS BELOW