Fatal Lucciauno
Shows Us Rahmeece
AND Its Not To Be Missed 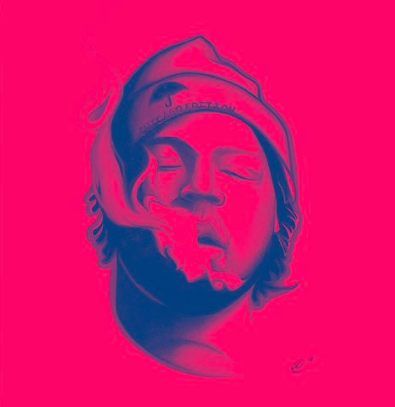 Central District native Fatal Lucciauno is back with another collection of bangers on his most recent tape Rahmeece. The title of this project, Lucciauno’s true name, isn’t just some name pulled out of a hat. Rahmeece explores themes personal to the master lyricist including ‘rap personas,’ growing up in CD, and Blackness in America. Over the course of Rahmeece’s sprawling hour and sixteen minute runtime, Lucciauno once again shows us his poetic prowess and lyrical ability.

Production on the project is handled entirely and magnificently by Rob Reeves. Opening track “The Delegation” begins with sweeping synth chords, bells, and sounds of nature, a seemingly appropriate way to usher us into Lucciauno’s 2020 release. The introduction here is given room to breathe which in turn makes you feel like your listening to the orchestral opening to some Golden Age of Hollywood film. As choral vocalizations come in to back Lucciano’s signature passionate, heated delivery, you really feel like you’re being spirited away. Though, this isn’t a trip to some fake, cardboard cutout Hollywood set made to mimic a far off land. Rather, this is an invitation into Lucciauno’s raw, uncut psyche. “The Delegation” ends with a skit, where the rapper makes it clear that while Rahmeece (the man, not the album) is a genuinely great guy, Lucciauno won’t hesitate to come for you if you’ve wronged him.

Another highlight from this project is “Homefront”, a track that takes a critical look at police brutality in America. With lines like ‘killed by a black cop, little bro playing black ops,’ Lucciauno simultaneously highlights how pedestrian police violence against black men has become by mentioning it in the same breath as a video game while also potentially criticizing the amount of violence today’s youth are exposed to. The people who are a part of America’s ‘Homefront’ are being constantly exposed to the same kind of violence that’s right outside their door.

Beyond that, “Homefront” features a sample from a 2013 speech by Joe Biden, in which he advocated the use of shotguns for home defense. In this context, Lucciauno seems to be using this as a tool to contrast this rich, white politician advocating guns for home defense while, as a society, when black men do the same thing they are demonized or labelled as ‘dangerous.’ Like most of Lucciauno’s songs, “Homefront” is a tightly knit lyrical piece that sticks in the listeners mind long after the album is over.

The album’s bonus track, “CD State of Mind” is one of the best songs of Lucciauno’s career. A clear nod to Kendrick Lamar’s “Compton State of Mind”, this is really when Lucciauno is at his most introspective and grounded. With specific callouts to places in his home turf like Miller Community Center and Willow, “CD State of Mind” serves as a vessel for Lucciauno to take stock of his career, how he got here, and how he looks back on CD years later. It is at times somber, but proud with lines like ‘saucy with seasoning, au jus from The District.’ Clearly Luciaunno recognizes there are problems in his old stomping grounds, but CD made him what he is today.

Rahmeece is one of Lucciauno’s tightest, most well-polished albums to date. It is all at once a commentary on violence in America, a shoutout to CD, an introspective look into his own life, and a look at identity in the hip-hop industry. But below all of that, the album just slaps. Time flies when I have this album on and I inevitably find myself looping back to Reeves’s strong, epic synths in the first track.
Fatal Lucciauno’s next project can’t come soon enough.

CHECK OUT RAHMEECE AT THESE STREAMERS BELOW