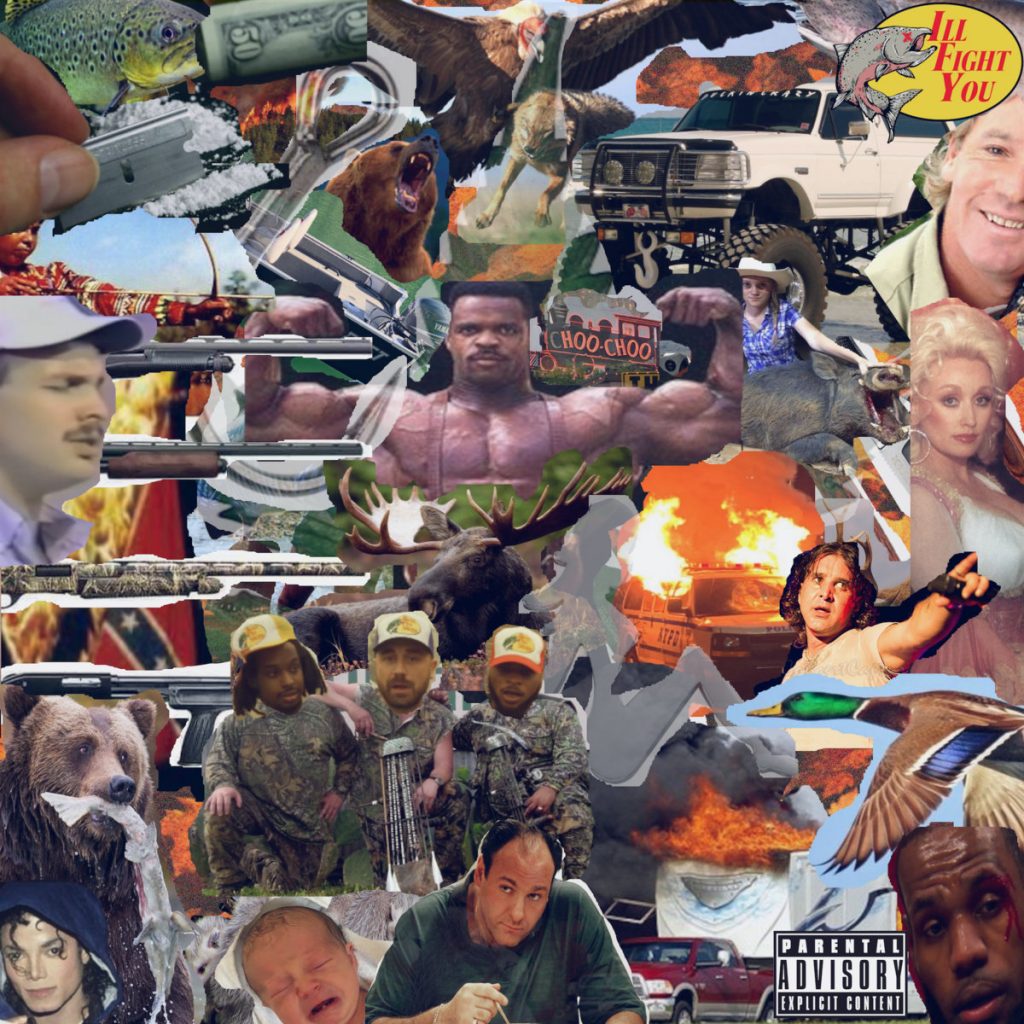 In 2013, ILLFIGHTYOU from Tacoma, WA dropped their debut self-titled album. The artwork was a collage of all different types of faces, some celebrities, contorted muscles, smiles, wide eyes, strange looks, etc. Fast forward to 2020, a seven-year hiatus, and ILLFIGHTYOU is back with their second album, ILLFIGHTYOUTOO. The name of this album and even the art-work are close to identical to the last. This new album also has collage cover-art and it is definitely a continuation of their first project. The artwork gives you the same frantic, nutty feeling their music gives you.

A lot of time has passed – but is there a more appropriate year and time for some ILLFIGHTYOU music? I mean what year has ever existed that has made so many people want to fight? Some people are fighting poverty, fighting racism, fighting inner-demons, fighting depression, fighting Covid, fighting forest-fires, fighting with our kids during distance-learning, all we fucking do is fight. So it is apropos for some new fight music. ILLFIGHTYOU consists of 3 members, Khris P (vocals and production), GLENNLIKESPIZZA (vocals), and Ugly Frank (vocals).

To me, ILLFIGHTYOU’s music feels and sounds like when ya are coming down off some coke and you are still kind of high, but not having as much fun as you were, slightly paranoid, sweaty-skin, twisty jaw, angsty, and annoyed. Basically right at the moment when you would be most willing to fight someone. Maybe you do not know what that is like but now you can hopefully relate. They really do a perfect job of capturing and expressing a type of cool, cold, rage that we all experience but maybe we are too afraid to admit. ILLFIGHTYOU brings this out in us and this is why we turn-up and celebrate their music. The album was recorded at Post Office studios in Tacoma, WA.

The album starts out with a slow intro, piano-laden, choppy, happy, boom-bappy song titled “GRAMSWITHGRAMS”. Ugly Frank starts the song but it quickly delves into a frightening back and forth between Glenn and Khris that somehow make the slow, chill beat into an incredibly energetic diatribe.

Song 3 “CRASHEDTHEPARTY” is classic ILLFIGHTYOU. It has angry, hyped-up, druggy bars from Glenn. The pace of this album is a little slower than their first recording but the level of electricity in the songs is just as high.

“CARBROKE” is the next song. “I’m off a jewell-pack. I’m never gonna call my mom. I don’t play beer-pong. I’m ‘bout to go buy a gun. I eat for more than one. Life is so crazy when ya the chosen-one.” GLENN is going hard on this one. The music is upbeat, boppy, but still weird. “I need a drink. I need a drink. I’m hearing voices in my head. I’m drinking water mixed with lead.” That is the hook and that lyrical direness and not giving a fuck attitude perfectly sums-up the group.

The rest of the album is in this vein of extremely well-produced Hip-Hop with a garage, punk-rock, street, underground, star mentality until song 9. “YOYO” is just as much rebellion music as the rest of the album but this song has a more classic, chill Hip-Hop sound, almost a Native-Tongue aura to it. It shows us that ILLFIGHTYOU are a fully-evolved, maturing group that can make more than party music.

Track 11 “FLORIDAMAN” is also a bit more chill than the rest of the album. The music is more sample-driven, it has an old-school, classic-soul feel to it. ILLFIGHTYOU is able to satisfy their core-audience with all the wyling-out songs but they also are capturing new fans with their more typical sounding Hip-Hop songs they also have on this album. It will be cool to hear how their music keeps evolving, changing, and growing as these dope-artists keep maturing.

The last song is more of a trippy, drugs that take you down type of sound. They might have put-down the grams and pills and picked-up some shrooms for this one. It is a solid place to end the album.

The background samples and noises, talking, yelling, screaming, and sounds that are constantly in the back of all the songs give the music an intensity that is rarely felt in Hip-Hop. There is also a really healthy balance between the vocality of all the MC’s. GLENNLIKESPIZZA is all frustration and fury, with a deep-voice that is very aggressive. Ugly Frank has a classic Hip-Hop flow and pentameter. His rhythm and bounce are top-notch. Khris P has a higher-pitched, slightly nicer sounding spit. All the different styles really give the package a well-roundedness: Khris P’s production covers the base of pure Hip-Hop for all the heads, Ugly Frank’s flow is impeccable, and the vibes GLENN gives make ILLFIGHTYOU one of a kind.

CHECK OUT ILLFIGHTYOUTOO AT THESE STREAMERS BELOW