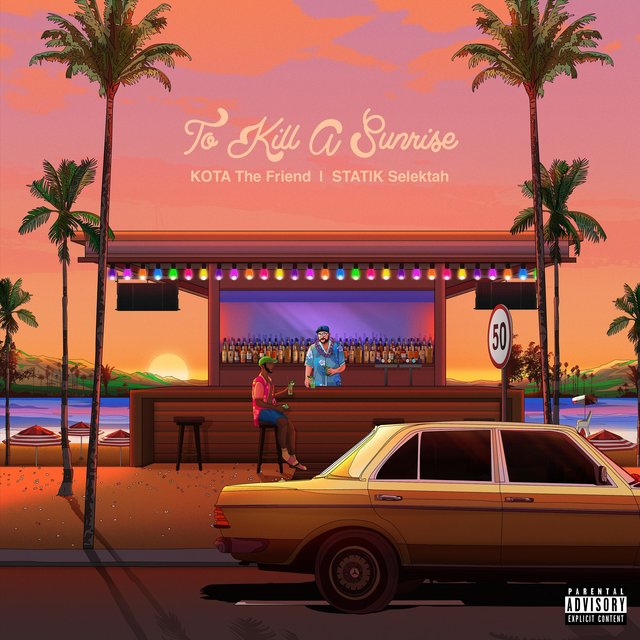 In today’s climate of divisiveness, ridicule, and contentiousness, a little positivity is a welcome reprieve. Though we suffer the daily blows of one outrageous tragedy after another, keeping hope and pursuing health can strengthen the soul to stand firm in resilience. This is the overall message of Kota the Friend’s and Statik Selektah’s new album To Kill a Sunrise, released March 19th, 2021. This collaboration matches strength with strength as Kota the Friend’s ideological lyrics seem to dance over Statik Selektah’s samples, drum breaks, and cut-scratching. Both artists are masters in their own right, Kota in rhymes and Statik in production, and both bring some of their best work into this project.

Since his debut album Anything. (2018), Kota the Friend has cultivated a message of love and belief. Though the sobering realities of trauma and mental strain are common threads in his music, Kota’s lyrics always seem to encourage the listener to find the strength inside of themselves to press on through the negativity and find healing for their past hurts. Communicating these earnest themes through intricate rhymes has earned Kota the Friend recognition from the likes of Rolling Stone and Billboard.

Born and raised in Massachusetts, Statik Selektah has been working in the New England Hip Hop Scene since the early 2000’s. For the last two decades, Statik Selektah has become one of Boston’s most respected radio personalities and worked with heavy hitters like 2 Chainz, Freeway, Killer Mike, and Nas. Always approaching production with the mindset of a Bostonian DJ, Statik Selektah wields classic East Coast Hip Hop with unprecedented skill.

In To Kill a Sunrise, there is an uncanny level of cohesiveness between each song’s lyrics and the particular beats behind them. It is evident from this phenomenon that Kota and Statik shared a special kind of simpatico between the two of them while making this record. In the opening track “Wolves”, Statik provides a composition of meandering flutes, cinematic violins, and rumbling hand percussion. These concoct an ambiance similar to an old western or martial arts film. In this song, Kota draws imagery from the classic samurai film series Lone Wolf and Cub, imagining himself as the series’ protagonist Ogami Itto, a wandering ronin who carries his young son Daigoro on his back. This correlation is exemplified by the lyrics of the hook:

“I can’t lose
Brought up by the wolves, parted from the pack
Howlin’ at the moon, young’n on my back
Mountains in my view, coming for that food”

Like the tale which inspired it, Kota’s own tale lauds his ascension from primal potential to prolific prosperity both as an individual and as a father. This dramatic depiction fits right in with the mood set by Statik’s beat. Similarly, in “Sunrise”, the vocal sample’s oohs, and the alto sax solo line transports the listener to the twilight of dawn where glimmers of light are breaking through on the horizon. Kota’s lyrics in “Sunlight” speak of philosophical enlightenment and present Kota as the bringer of revelation to a world wrongfully held captive in slumber. It is perhaps in this song where Kota the Friend declares his musical career’s aim. He says:

“The devil see me comin’, he soakin’ like, yo, that’s him again
Helpin’ people out of the fallacy they been livin’ in
Forty-somethin’ minutes, I keep them focused like Ritalin
My mission is completed through writtens uplifting villages”

With the delivery of these lyrics and the like, the listener can almost visualize Kota walking to and fro the earth, arms open liberating humanity with the message of love, hope, and positivity. This promise of a forthcoming freedom is a sentiment felt both in the lyrics as well as the beat. Because To Kill a Sunrise is a collaborative project between a highly conscient-minded emcee and an immensely communicative DJ/producer, the beats of this album cannot be considered mere backing for the lyrics. Instead, both Kota the Friend and Statik Selektah are sharing in the work of disseminating these messages, both of them center stage without stifling one another’s presentation. This is collaboration of the finest sort.

This album maintains a consistent tone and message from start to finish. All of the ten tracks are mellow, slow, contemplative pieces with the majority of them surrounding the themes of mental health, self-assurance, and perseverance. “Go Now”, a love song featuring a hook beautifully sung by Haile Supreme, is perhaps the only song that deviates from that central message. However, do not misunderstand consistency for monotony. Kota and Statik have enough to say about these topics to grapple with them from numerous different angles that remain fresh and interesting in every instance. The song “Hate” tells how negativity can be a motivator toward proving wrong one’s haters. “The Cold” is about existing upon oneself, formulating one’s own perception of the world, and cultivating one’s own treasure and sanctuary. “Live & Direct” is a success story of finding fulfillment in life by choosing goodness instead of propagating the same hurts one’s experienced themselves. Each track has its own proverb, its own kernel of wisdom, and each deserves its own attentive listening.

Perhaps the greatest accolade of this project is that it is unapologetically hopeful and wholesome without being even remotely trite or feeble. It may be the unhidden tellings of Kota’s own experiences of tragedy and trauma that give this buoyant gospel the grounding of reality. It’s the journey through hardship that surpasses blind optimism and promises a hope that these artists have truly found for themselves.

This album is a musical marvel and its levity is well-needed in a time such as this. So make sure to check out Kota the Friend and Statik Selektah’s To Kill a Sunrise available now wherever music is played, and follow @KotaTheFriend and @StatikSelekt on Instagram and Twitter.

CHECK OUT TO KILL A SUNRISE AT THESE STREAMERS BELOW