Makkk Hussien Pulls Out The .38 Special & Lets Off Six 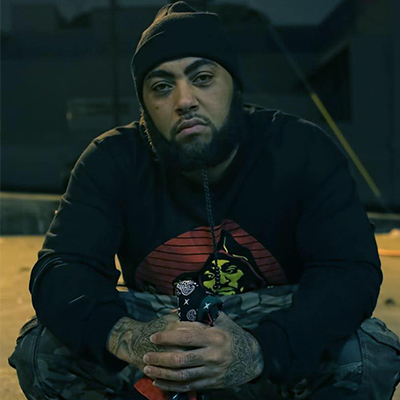 Tacoma like many cities has been dealing with the tension of gentrification and changing demographics.  The old guard is hanging on to what’s left with bitter distrust of their new neighbors.  Many of the new neighbors look at the old urban traditions with disdain. 2020 added fuel to these fires with the murder of Manuel Ellis by Tacoma police and the city had its worst homicide rate in 25 years.  Even after a winter which normally will cool off tensions, it can sometimes feel like a powder keg.

Documenting the landscape through all this and before is Makkk Hussien.  His latest EP is .38 Special–his third project since 2019–and it speaks to that simmering of tempers with commentary fit for those who live by an old code forged on blocks everywhere under similar pressures.

Before we go any further, let’s talk about beats.  One thing that has become increasingly clear over Makkk’s last three projects is that he is a marksman on beat selection.  Independent rappers know that finding solid production is a rabbit hunt, a dive through digital layers of dense vegetation trying to find something to feast on. Yet Makkk spots the prey in the brush every time, never failing to bring home something juicy for dinner.   The tracks on .38 Special maintain those full plates through a six-course meal ready for serving.  On production alone, the EP is a must-listen for fans of the gritty.

And gritty is what Hussien brings.  He opens the EP with “Bishop” where he draws parallels between himself and his peeps with the iconic villain played by Tupac in his cinematic debut.  Over a ghostly piano-driven slap from Jimmy Dukes, Makkk makes it no secret where his mindset is at.  It’s turf honor over everything and any soft shit is going to get annihilated.  Moving into “The Wire”, he lays out a playbook for would-be hustlers, continuing the platform addressed in his last project Supreme Gangstaz that the new generation of block figures aren’t cut from the same cloth as Makkk and his affiliates.

“Surviving the Strange” reunites Hussien with Southpaw Lefty over a Church Santana slumper where the pair analyze the perils faced in the streets and the extremes it takes to make it out.  CD Sane, Makkk’s ace and long-time collaborator, hops in next on “Its Like That” with that matter of fact cadence the vet is known for.  Listening to the two here feels like you are sitting in the backseat of a bucket racing through some back alleys with Hussein and Sane in the front trading verses.

.38 Special ends with “Reflection”, a closing that slows things down and sees Makkk speak on his family and the road that has brought him to where he is at now.  The track ends abruptly, spotlighting how contemplative moments like this can be cut short by a hostile world that is ever-present.  Its a fitting close to another potent release from the Tactown assassin.  Go check it out now.

CHECK OUT .38 SPECIAL AT THESE STREAMERS BELOW