Marshall Law Band
Bring It Back to
12th and Pine 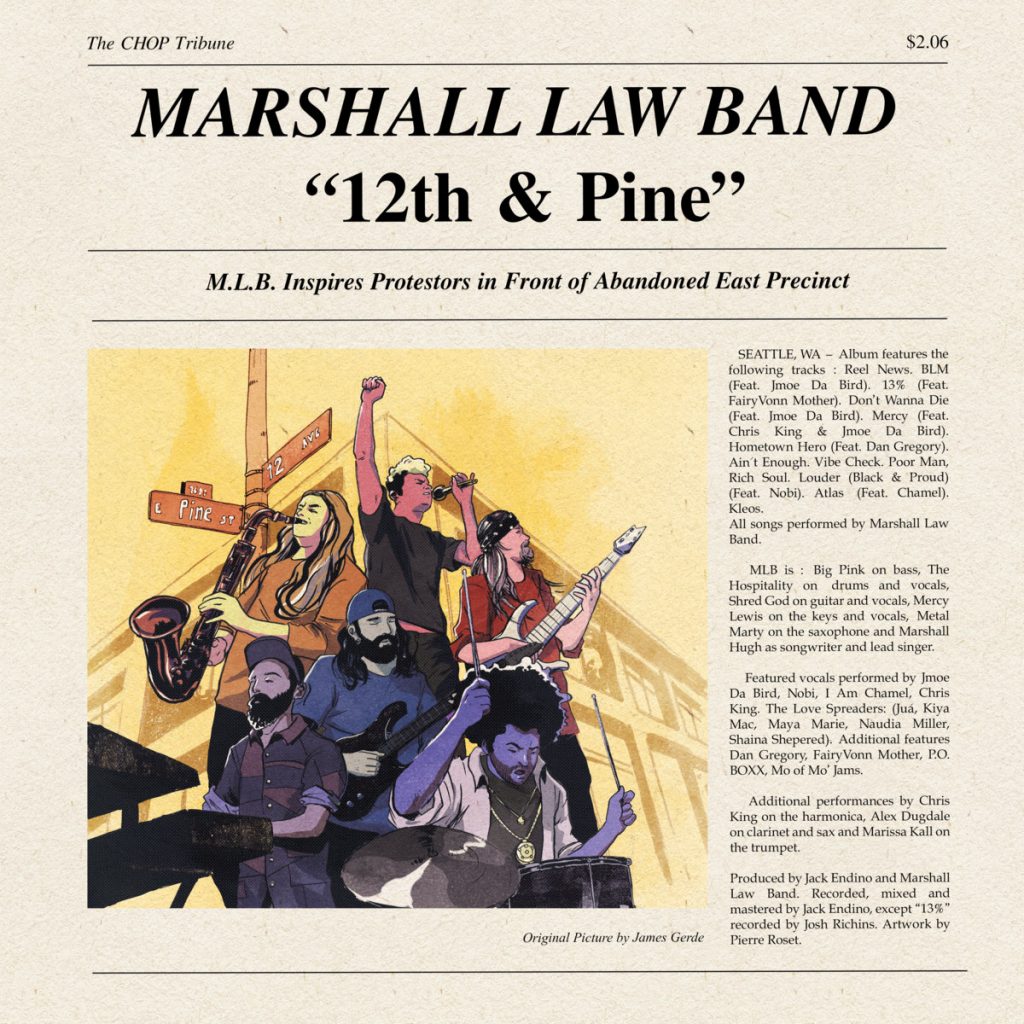 The sheer momentous talent of Marshall Law Band cannot be overstated! Their music, a fusion of Funk, Rock and Roll, and Hip Hop, features evocative lyrics over live instrumentation. But this band is so much more than just entertainment, they’re a voice for their community.

When the Capitol Hill Organized Protest (aka The CHOP) began to assemble around the Seattle Police Department’s East Precinct, Marshall Law Band packed their instruments and joined in the demonstration. Drummer Matt McAlmen aka Hospitality recalled “we were performing to try and charge people up” (12th & Pine Documentary, 2020). The group remained a steadfast presence in The CHOP, sharing in the rally cries of the people and holding ground amidst the tear gas, flash bangs, and rubber bullets. Following this season of trauma and passion, MLB took a two month sabbatical to recuperate, and then got to work on their new album, 12th & Pine and its accompanying graphic novel and documentary.

Forged in the blaze of The CHOP, 12th & Pine is named after the intersection outside of the East Precinct, the epicenter of the protest. The album, produced alongside Sub Pop legend Jack Endino, gushes with the band’s personal pain and frustration yet flows melodically, administering the bitter truth of Seattle’s current state in sweet delivery. Lyrically, these songs are complex and cerebral with references to figures of Greek mythology and tenets of Jungian psychology. Musically, MLB deviates away from Funk and leans more into the Blues and its various subgenres. Hip Hop meets Big Band Swing In the movement anthem “BLM” in which frontman Marshall Hugh incorporates scatting along with his leisurely style of rap. Beyond the blues harp harmonica in “Mercy” and the soulful choir in “Don’t Wanna Die”, there’s also the surprising inclusion of Disco in “Louder (Black and Proud)”.

To say that this album is fun to listen to would undermine the sobriety of its themes and message. However, the drums, the guitars, the keys, the saxophone and bass lines make 12th & Pine an exhilarating auditory experience, each masterful lick extracting a tap of the foot and a smirk on the lips. Ultimately, Marshall Law Band took full advantage of this project to give a platform to the marginalized and a voice to the voiceless. With music this good, anyone would struggle to avert their ears from this plea for progress and change.

CHECK OUT 12TH AND PINE AT THESE STREAMERS BELOW