Myke Bogan is Buying For the House on
Hotel Happy Hour 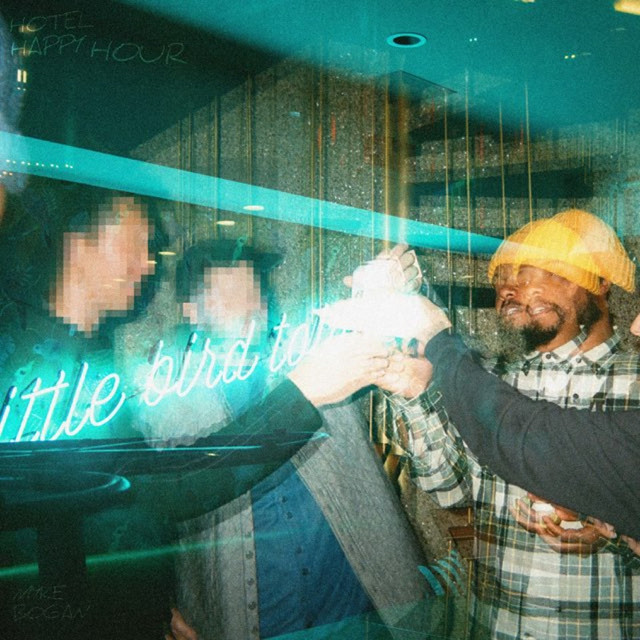 Earlier this month, Portland/LA based artist Myke Bogan released Hotel Happy Hour, his second project of 2020. Hotel is filled the brim with Bogan’s signature chilled out braggadocio which is complemented perfectly by the lo-fi soundscape on each track. This particular combination of delivery style and instrumentation makes Hotel a natural continuation from Bogan’s previous release, Cult Beauty. This isn’t just Bogan retreading old ground though. Hotel manages to take the sound from the back half of Beauty, add that extra *oomph* to it, and distill it into ‘lo-fi beats to rail lines and get money to.’

Bogan’s lackadaisical approach to rapping makes his bragging rights sound more like matter-of-fact statements. For example, on the album’s opening track “Fragments”, when Bogan raps about ‘screaming out money ain’t a thing cause it’s not now’ I believe him. Like, yeah, someone saying this so coolly and calmly has his shit together. He doesn’t feel the need to brag, because he doesn’t need to. Bogan has got his ducks in a row and is only going up. This almost tranquil delivery continues throughout the 12-minute EP, interrupted by the occasional celebratory outroar.

We actually get one of these emotional outbursts on the next track, “Watermelon White Claw”. A chill party anthem that’s reminiscent of Cudi and Mac Miller (complete with late-2000s sensibilities in lyrics and tone). The track is an ode the women Bogan attracts with his newfound fame, including one that is fond of ‘walking ‘round the house making breakfast with a butt plug, in and out her mouth go my dick with my nuts cuffed.’ Now, these lyrics certainly a conjure a…. vivid image, but that seems to be the point. I’m not sure if this is what ‘making it’ is, but Bogan certainly makes me feel that way.

Overall, Hotel Happy Hour delivers on what we’ve come to expect from Bogan and serves as a solid follow-up to Cult Beauty (another project you should check out ASAP.) Bogan has been a staple at festivals around the country and his shows in and around the PNW especially are always a great experience. A live set from Myke Bogan is at the top of my wishlist for when we can finally go to shows again.

CHECK OUT HOTEL HAPPY HOUR AT THESE STREAMERS BELOW