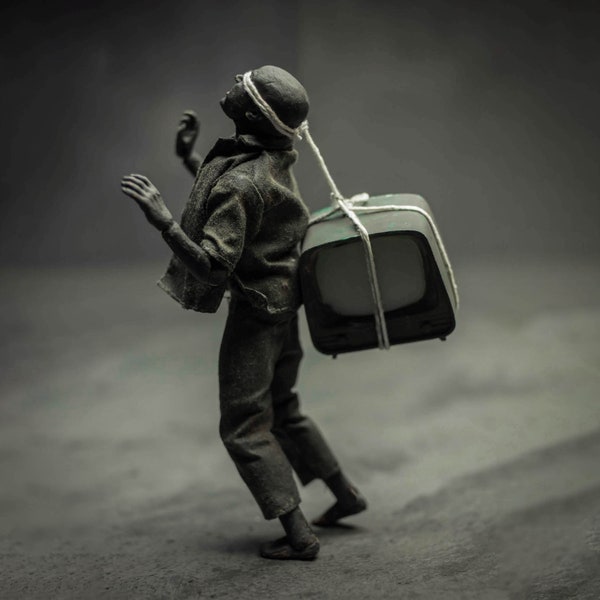 Troy Jamerson, (Pharoahe Monch) has earned his status as a legendary emcee. His debut record with emcee Prince Poetry, Organized Konfusion will be turning 30 this year. During these three decades in the game, Monch has served fans a catalog full of dizzying flows and acrobatic rhyme schemes. Despite receiving acclaim for his penmanship from critics and his diehard loyal fan base alike, Monch has never cracked into mainstream rap-radio. This doesn’t seem to bother him very much though, if anything he embraces his underground status and uses it as license to speak on topics that many more radio-friendly rappers might shy away from.

On his latest project, Pharoahe has assembled a team of musical assassins to form a new group, performing and recording under the name th1rt3en. In th1rt3en’s recent Tiny Desk performance Monch introduced drummer, Daru Jones and guitarist, Marcus Machado by saying, “We’re a unit, it’s not like it’s just me. We’re three, and the power of three is incredible.” This incredible power that Monch speaks of translates very well into the group’s debut project A Magnificent Day for an Exorcism. Songs like “The Magician” feature climactic moments where all three members seem to be throwing everything they have at the track, creating an energy that is both volatile and powerful.

The project’s opening track “Colt 45” starts with a sample of a man and woman reciting the lord’s prayer playing on top of the sounds of a man choking. At times this choking noise morphs into howling saxophones and guitars. When the beat comes in, it features a bass clarinet sample, which sits really low in the instrument’s range, resulting in a sound that is somehow equal parts breathy and ominous. Pharoahe’s verses remind you why he has developed a reputation as a legendary emcee. He attacks the beat spewing head-spinning lyricism with rhyme schemes so layered they can be difficult to keep up on. The track’s second leg opens up into a harrowing guitar solo, accompanied by some manic drum fills. The solo section winds down into unintelligible female whispers panned to each side, giving the listener the sense of being in a dark room and having ghosts whispering into either ear. Overall “Colt 45” serves as a fantastic tone-setting track for the whole album.

Throughout this project, the trio manages to keep the moods of the instrumentals fresh while maintaining enough atheistic constancy to feel like one cohesive work. Take the track “Scarecrow” for instance, while a horrorcore purest probably wouldn’t qualify this as horrorcore, it certainly seems like that is the style the trio was inspired by when crafting this beat. The chirping syth stabs at the center of the instrumental are reminiscent of the iconic “psycho strings” from the Alfred Hitchcock film. Several tracks later on “Oxygen” the listener is greeted with a jazzy, groovy, spacey instrumental that sounds like something Funkadelic could have made in their heyday. The vocals on the chorus of “The Exorcist” sound like some sort of crazed witch doctor. The performance is so strained and shrill that I would have would have sworn it was Ozzy Osbourne upon my first listen. The track is freaky in all the right ways.

The closing track, “Kill Kill Kill” sounds like the soundtrack to an 80’s buddy cop movie car chase. This mood is punctuated by a well-placed talkbox that transitions the song into its second half. The ending moments of the album feature guest vocals from singer, Smithsoneon who’s tender vocals are complemented by some space-aged syth patches. It’s a pristine and calm way of ending what has often been a chaotic and tumultuous album.

I really enjoyed this project and I think everyone should give it a listen or two, but beware that some heavy topics are broached during the album’s runtime, including police brutality, homophobia, racism, and mass violence. So don’t go into this album until you’re prepared to ruminate on these issues and the unfortunate role they play in American society.

A Magnificent Day for an Exorcism is a really strong first showing for th1rt3en, and I can’t wait to hear more from the trio. They seem to have a winning formula for songwriting, and an emcee who can rap absolute circles around a beat. I’m excited to see where they can take these sounds and styles in the future.

LISTEN TO th1rt3en AT THESE STREAMERS BELOW