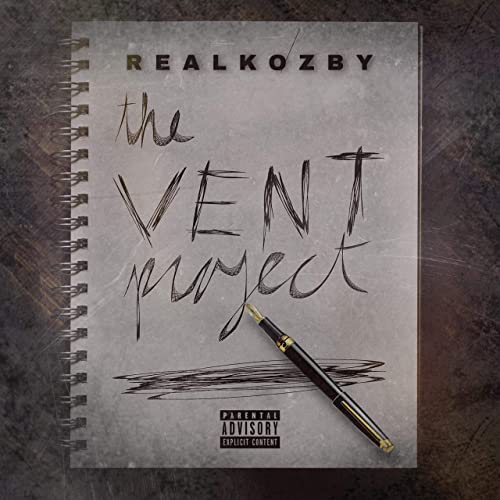 Tacoma is known for street rap. Everything else is secondary in this city but we do have some bar-heavy MC’s to speak of and one of them is Real Kozby of Silk Road Entertainment. Real Kozby is a classic spitter relying on metaphors and clever barbs reminiscent of some early 2000 golden-era vibe. He is keeping the pressure on in 2021 and his first release is “The Vent”, which is a nice, short 9 track project.

The album has a mixtape feel. The intro is his cute daughter Zayna declaring that her dad is the GOAT. Following this intro is 8 songs, each titled Vent l, Vent ll, and so on. Vent l, is minimal in beat structure. No drums, just slow melodic, background soundtrack sounds, no hooks, no chorus’s, just bars. Kozby has grinded locally and has some serious fan-base in Washington State. His fans love his battles-rhymes so if you feel his rap-strong music than this might be your favorite project of his.

Vent ll and Vent Vll has some minor auto-tune lacing his raps but it works cause the beats are pretty and poppy, silky, with some dreamy piano riffs. Vent Vlll also has some as well however there still is no singing or hooks, just under 3 minutes of serious spitting.

Here’s a sample of the sharpness of the raps you will hear on “The Vent”. Check “Vent lV”:

“I hold a lot of weight like a fork-lift

I be giving ya’ll the game like a forfeit.

They don’t show the kid love, I’m an orphan

I already took off, I’m in orbit.

Plenty of 90’s and early 2000’s references for the Culture Lovers out there as well.

The rest of the album fits firmly in this lane of radio-friendly sounds over athletic, gymnastic raps from Kozby. There are no guests, no DJ’s scratching, and absolutely no filler. Just crispy raps.

CHECK OUT THE VENT PROJECT AT THESE STREAMERS BELOW