Ricardo Snarez Will Have You Locked in a Beautiful Vendetta 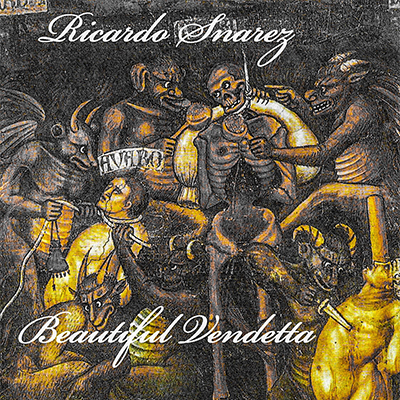 One of the highlights in Northwest Hip Hop 2010s was the duo Second Family out of Tacoma.  NoQuest and Cally Reed formed a lethal team that was able to take a diverse street sound and mutate the lyrical content into an X-Men standard of skill.  The two friends have long went on to solo projects but that level of lyrical prowess has not diminished for either MC since the split.  On Beautiful Vendetta, his second full-length project, NoQuest (real name Michael Donnell) has switched his moniker to Ricardo Snarez but the trademark mic savagery is in full effect.

It’s the second name change for NoQuest since Second Family, the first one being Johnny SkiMask of which he dropped a project Villainous in 2015.  I asked the 253 MC about the name shifts and Donnell explained that each one was like a different persona, a different side of his nature.  SkiMask was the grimy side and Ricardo Snarez is something else entirely and it shows in the audio.

The sound here beckons you to visuals of a haze-filled jook joint where Snarez is sitting center stage.  Melancholy jazz loops set the backdrop for his vent session and the tracks serve his low-key delivery magnificently.  Take “School Bus” where a slowed down sax invites doom over filthy drums all the while Ricardo dishing out gold like this:

“I don’t trust cops, they’re like the swine flu
The clock ticks each second like nine nukes”
Time is of the essence/ Its a death sentence
Written by the reaper
I want it all now…. why wait for Heaven/
You bitches still buyin’ what they sellin’
Slave wage felon…rebellion”

There are gems like that all over the eight-track opus.  Its his show almost all the way with Don James making the only guest appearance when the two trade power punches on “Full Amount”.  Another highlight is “4 My Soul” where Snarez shifts from a singsong chant to a slow spit dishing on working through inner stresses.  Later on “Stainned Glass Aftermath”, Ricardo ponders existence with an ice-cold pen:

“Samurai slice, hear my war cry loud
Mushrooms clouds in the background
Put the fire to your set, make it look like a campground
Enemies sleep in a bag
No church in the wild, never miss what you never had
In the last days, there’s ash in my hourglass/”

Hopefully, we don’t have to wait another nickel and change before we hear from Donnell again.  In the meantime get this one into your rotation asap.

CHECK OUT BEAUTIFUL VENDETTA AT THESE STREAMERS BELOW