The Young Take On
PAris's THE DEVIL MADE ME DO IT 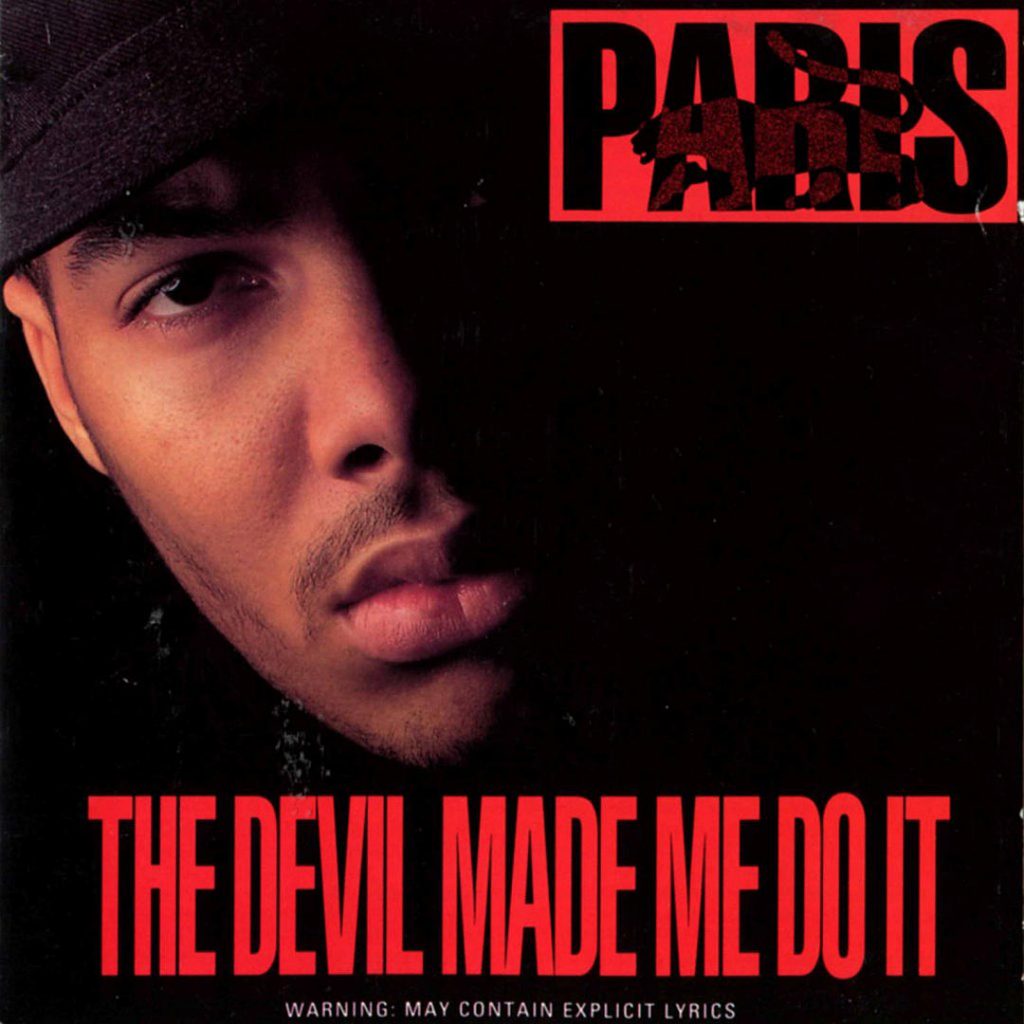 The Young Take is a new feature where we have a young writer offer their insight on an important album whether that be current or from rap’s history.

The Devil Made Me Do It, an album produced and performed by Paris, a rapper native to the Bay Area known for his politically driven music about systemic racism against Black Americans, is powerful and features songs which altogether are moving anthems with strong messages on their own. Oscar Jackson Jr, better known as Paris, debuted into the hip-hop industry with his 1990 album The Devil Made Me Do It after graduating from UC Davis for Economics. He has been a vocal advocate for the Black Panthers and his pro-Black beliefs are evident throughout this album. Songs like “Escape from Babylon”, “Scarface Groove” and “The Devil Made Me Do It” are apparent examples of Paris using facts that are relevant to this day to direct attention to systemic racism against Black people in America.

First and foremost, it is important to address the political influence on Paris’s music. He uses his platform to address the hypocrisy within the system, such as in the song “The Devil Made Me Do It” where he says “Food stamps and free cheese/ Can’t be the cure for a sick disease.” He’s bringing attention to the lack of effort from the American government in solving hunger and poverty-related issues that are still disproportionately impacting Black communities. This isn’t the only time Paris called out the effects of white supremacy, in the same song he says “Rape then pillage everyone on the planet/ Then give ’em fake gods/ at odds with Allah/ Love thy enemy and all that hoopla.” Paris is talking about the colonization of Black people, addressing the cultural genocide of Black people by stealing and assimilating them into eurocentric and Christian beliefs. Interestingly, this song was banned by MTV since it seemed controversial at the time but in truth, there isn’t anything controversial about it. The music video had scenes which you could argue that called out Abraham Lincoln for his deceitful stance on slavery while he’s been glorified in American history for abolishing slavery. My initial reaction to this song was to be surprised at how relevant his messages still are, this just puts the reality of these persisting socio-economic issues Black people face in America and there still hasn’t been any form of real reparations to those communities.

The album consists of a raw theme through its intensely honest lyrics which are paired with energetic yet dark beats. In my opinion, Paris manipulates his beats in a way that is reflective of what he talks about in a song. For example, usually when Paris talks about Black pride and his lyrics are focused on uplifting the community, the music is groovy. This is visible in his songs “Break the Grip of Shame” and “Ebony”. When Paris’s tracks are more focused on the Black Panthers, racial injustices, and politics, his music is more ominous. We see this in his songs “Scarface Groove”, “This is a Test”, “Brutal”, “The Devil Made Me Do It” and the commonality amongst these songs is that they all have an appealing bassline that complements the serious concepts he covers. However, “Mellow Madness” stuck out to me the most and is probably why it’s one of my favourite tracks on the album. The saxophone instrumental, groovy bassline and it’s steady relaxed drumbeat all contribute to it’s laid back feel.

One of the most important things that stood out to me was how Paris uses literary devices to add emphasis on messages he finds important. For example, in his song “Escape From Babylon”, he says “Hopes are lost to the malevolent gameplan/  Annihilation of original citizens of this great planet Earth.” This is a hyperbole where he refers to the colonization of Africans by calling them the original citizens of the earth. He’s talking about how anthropologically homo sapiens first originated from Africa with darker skin tones due to the melanin genes in our DNA. These were later mutated off when homo sapiens migrated to northern geographical areas where they didn’t need the gene for sun protection, such as Europe. This phrase does its due diligence in capturing the cause and effects of colonization from which Black American and African nations are still struggling with. The phrase is also ironic because the racist idea behind colonialism and cultural genocide is based on social Darwinism that argues that certain groups of people are better because of their genetics. Paris in a sense also uses authorial intrusion to talk to his listeners. In his song “The Devil Made Me Do It”, he says “Ya can’t be intrigued/ by the leads a pig lead/ Unless you don’t give a fuck to be free” while the track falls silent when he raps, “don’t give a fuck to be free”. I’ve seen this often amongst books or movies as a character narrates, this type of literary device is helpful to create a relationship amongst artist and audience but also helps bring importance to what the artist is saying.

Paris’s album The Devil Made Me Do It is an album I can get behind because it’s smart, groovy, and politically relevant. Paris’s references to Malcolm X, the Black Panthers, and political fallacies that are still relevant even 30 years later. These are inquiries we still need to hear because it urges us to ask the question if we’ve progressed as a society. The album reminds us that Paris is pro-Black and not pro-hate, which is a message that still applies today. And songs like “Mellow Madness”, “Scarface Groove” and “The Devil Made Me Do It” are worth the listen for their alluring beats and lyrical meanings on systemic racism that still hold similarities to what Black communities face today.

Sanjana Srivastava is 17 years old, from Ontario, Canada, and in her last year of high school. She’s looking forward to being a policy analyst for the Canadian government. She is passionate about social justice and volunteers for nonprofit organizations outside of school. She’s also an avid reader and dancer in her free time.